It was Melody's papa, Morris who inspired the use of perforated paper rolls in player pianos.  Morris lived in Edwin Votey's workshop at the Aeolian Piano Company factory in the United States of America.  Edwin was working on a design for automatic piano playing machines.  Ultimately, he was instrumental in designing the Aeolian "Pianola".  This was the first official player piano that operated on air pedaled by a human and notes controlled by a perforated paper roll.  Again, neat holes utilized to tell a machine how to operate!

What people don't know is that Morris, the mouse, chewed holes in Edwin Votey's drafting paper (the paper he drew designs upon).  It was these neatly chewed holes that inspired the Pianola's paper rolls.
Thank you Edwin.  Thank you Morris

Melody's papa's grandfather, Jacque came from Lyon France.  He lived in Basile Bouchon's workshop.  Basile was a weaver--someone who creates cloth.  Basile invented a loom that could produce patterns in cloth weaves based upon paper rolls with holes punched in them...

The stamp of Emment mouse commemorates his "chewing" of holes into cheese for the Swiss.  This inspired Swiss Cheese, of course.  Without Emment there may have never been holes in Swiss Cheese.  These holes have inspired many inventors throughout history all the way up to today's modern times as you'll soon see! 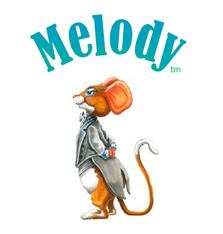 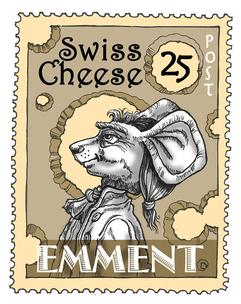 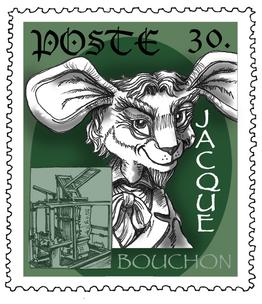 Melody is very proud of her family.  There have been many famous mice in her family history. She often wonders what she will be remembered for...
The stamp collection you see before you
commemorates the achievements of her ancestors:

Notice in this picture above that the loom is equipped with a perforated paper roll.  This roll tells the loom what the weave is to look like--pretty ingenious!
What the world has never known until now is that Jacque, the mouse, inspired Basile Bouchon to produce this design.  Be sure to read "The Weavers' Mice", one of the prequels to "The Player Piano Mouse". 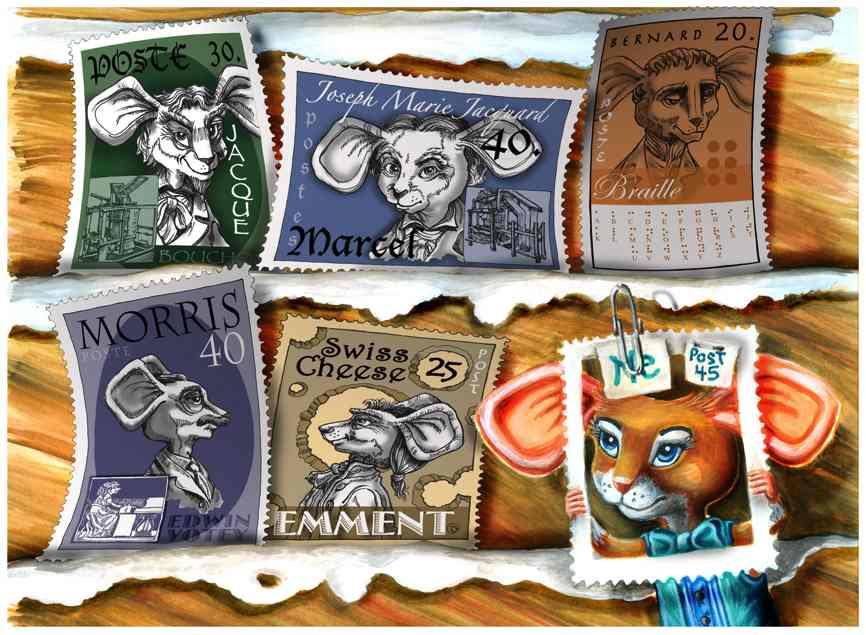 See the similarity between the computer punch cards of the 20th century and Jacquard's Loom punch cards from the 19th century?  And to think that two mice helped inspire these designs!  Mankind has to thank our talented mouse friends for chewing holes so neatly for us!

It was Bernard, the mouse, who lived in Louise Braille's father's workshop.  Louise's father was a leathersmith--a person who made leather straps for horse bridles and harnesses (a long time before automobiles).  Louise lost his vision when he was a young boy, but he did have a few years to see his father work.  He would sit in the barn where his father did his leatherwork watching as each strap was fashioned into a horse's bridle. 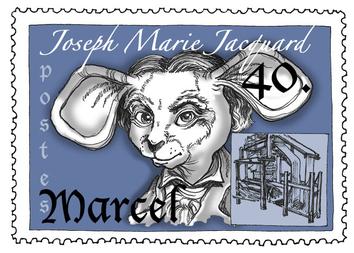 But, Jacque wasn't the only mouse to inspire a weaver.  His cousin, Marcel, inspired Joseph Marie Jacquard to produce the "Jacquard Loom".  This loom operated with perforated "Punch Cards" that told the loom what the weave would look like:

Shown in the stamp above, Braille is an organized system of "elevations" in paper.  These elevations can be felt with the fingertips.  The neat arrangement of the hole shaped elevations tells the blind reader what they are reading.
Thank you Mr. Braille!  And thank you Bernard!
Now what about player pianos?  Because, that's what all this hoopla is about isn't it? 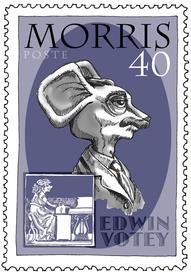 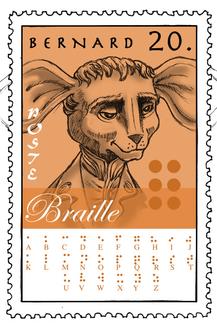 Melody's Stamp commemorates her amazing talent to compose piano music for player pianos.  Melody's talent for chewing holes neatly was used to create piano rolls for the Midway Piano Company.  You can hear some of Melody's rolls at the MUSIC section of this website!

After Louise Braille lost his eyesight, many years later Louise recalled Bernard's neat hole chewing.  Louise's memory of this would help create a system of organized punches on paper that blind people could use to read and communicate.  That system became known as "Braille".